Budget for Mindanao railway out soon

Rodiguez, who authored House Bill 1855, which calls for the creation of the Mindanao Railways Corporation and for funds for its operation, said that by 2011, at least $1 billion will be released by foreign investors from Germany or China in time for the project's initial construction. 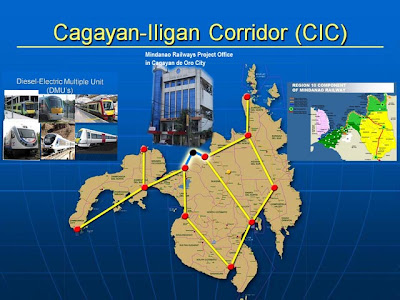 He said Congress has approved his bill and the money is now being released for the railway project to continue its operation.

"The ongoing project is expected to be finished sooner but not in time for the Laguindingan International Airport, which is about to be finished," Rodriguez said.

He said contractors will not rush the billion-dollar project as they will make sure that it will be state-of-the-art and one of its kind in Mindanao.

Rodriguez said they are already in the process of doing civil works, where they will pay lot owners and the indigenous people for the road right of way.

"This project is expected to cut off travel time within different cities in Mindanao by at least 50 percent aside from providing comfort to passengers. No hassles," Rodriguez said.

The feasibility study of the Mindanao Railway project started in 2003 and Rodriguez said they hope to finish it before his term ends.

The Mindanao Railway project is estimated to cost P66.5 billion (US$1.33 billion) and would be implemented in four phases with the initial route to start from Laguindingan and end in Cagayan de Oro City. It aims to cut the present 90-minute bus travel time between Cagayan de Oro and Iligan City to just about 15 to 20 minutes.

Source:
Published in the Sun.Star Cagayan de Oro newspaper on October 29, 2010.
by Nicole J. Managbanag
at 7:10 AM