First 3D cinema in CdO to open on November 13

Cagayanons will finally experience the first digital 3D cinema in the city when SM Digital Theater will open its doors to the public on November 13 at SM City Cagayan de Oro.

Earn Php1.04M per Year with this Great Investment!

SM Cinema will showcase Avatar 3D during the launching of their first 3D Cinema here in Cagayan de Oro on November 13, 2010, Saturday. Be there at the SM City Cinema 1 on the opening day of SM Cagayan de Oro’s first digital theater. Watch Avatar 3D and be ready for this very exciting experience. 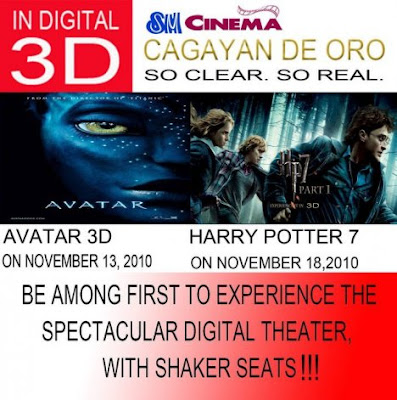 The digital experience is the new approach to enjoy movies. It is a set of equipment consisting of a digital camera projector, sound system, server, storage, delivery mechanism and security processes as defined by the Digital Cinema Initiatives (DCI), an organization established in March 2002 as a joint venture of the biggest names in the movie industry like Disney, 20th Century Fox, Paramount, Sony Pictures Entertainment, Universal Pictures and Warner Bros. Studios to establish and document voluntary specifications for digital theaters to ensure a uniform and high level of technical performance, reliability and quality control.


A digitally produced or digitally converted movie can be distributed to theaters via satellite, physical media, or fiber optic networks. The digitized movie is stored by a computer/server which “serves” it to a digital projector for each screening of the movie.

SM Digital Theaters use real silver-screens to ensure high-quality light reflection to give you the brightest colors and sharpest pictures.


With the SM Cinema’s digital theater technology color fading, jumping and film scratching become obsolete concepts. The SM Digital Theater offers a consistent image with no degradation over time. SM Digital Theaters lets moviegoers enjoy razor-sharp motion pictures every screening, in the way the director’s and producer’s intended them to be delivered. SM Cinema brings this unparalleled picture quality to millions of Filipinos across the archipelago revolutionizing the movie industry. With outstanding, long-lasting picture quality and unparalleled pixel response time, it’s easy to see how SM Digital Theater technology delivers an incredible movie experience that will keep you coming back for more.
In addition, the Dolby digital sound system magnificently creates the unsurpassed total movie experience. SM Digital Theaters boasts its top quality digital surround sound system that delivers amazingly crisp sound quality. Digital surround sound ensures that you will not miss a spoken word, sigh and musical note. It places you at the center of the stage, hearing everything as if you were at the center of every scene. Miscued dialogs, sound lapses are a thing of the past as digital technology ensures that everything is timed and heard perfectly.
Difference between Digital 3D and IMAX
First, there are actually 2 types of IMAX – the normal gigantic IMAX where the screens are projected on humongous screens, and the digital 3d cinema where the screen size is normal, but the images actually look sharper because it is digitally rendered. 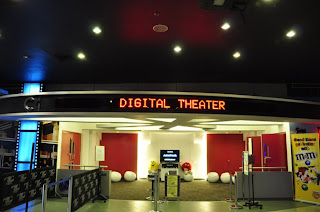 In other countries, these 2 IMAX types are priced the same, and some patrons have actually complained. They see the small digital screen and, although it’s in 3D, feel cheated since they expect an IMAX theater to be the gigantic screens they’ve been reading about. The result: they called the smaller IMAX “digital 3d“.
Here in the Philippines, SM never branded their Cinema 1s as IMAX technology. A great deal that comes out of this – the digital 3d theater actually priced lower than the normal IMAX, even as it delivers BETTER quality!
So what’s the difference? – JUST THE SIZE OF THE SCREEN.