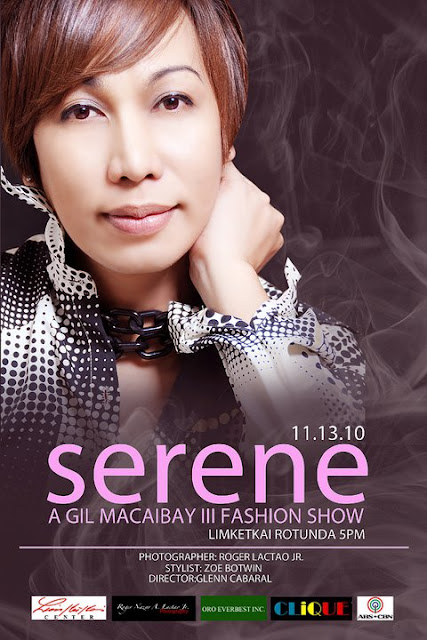 
Reluctant no more, Gil Macaibay III is now ready to showcase his design talents on the national stage. Being one of the featured designers on Luxewear Night on October 22 is a giant leap of faith for this highly motivated designer.

Though a huge name in Northern Mindanao, Macaibay is a relative unknown in Manila, the epicenter of Philippine Fashion. All that will change as he set his sights on a scale much bigger than his comfort zone in Cagayan de Oro City. Encouraged by mentors such as Renee Salud, Barge Ramos, Dong Omaga-Diaz and Frederick Peralta, Macaibay is now gearing for the big leagues.
He is now an active participant in the bi-annual Philippine Fashion Week, showcasing his strength as a designer of classy womenswear and putting twists on club menswear.
“I was able to watch the one Fashion Week. From then on, I was encouraged to join the next edition. Honestly, it was Frederick Peralta who convinced me to join, and the extreme influence and support of my friends seem ego-boosting enough for me to take the plunge,” tension and resolve evident in his voice.

Gil Macaibay and Sitti Navarro
Patience and continuous research as well as loving your craft, Macaibay knows, are the essentials in running a fashion business. He has dressed all of the city’s beauties such as Miss Teen Philippines Maxine Monasterio, local politicos, supermodel Jasmine Maierhofer, Muslim royalty and the Mindanao elite.
For three years in a row, Macaibay has dressed Cagayan de Oro’s most beautiful women in the annual Miss Kagay-an competition. He also ardently participates in prestigious trade shows such as Kasal.com. Macaibay also stages fashion shoots and fashion spectacles that benefit worthy causes that he heartily supports such as “Doctors on the Runway I and II”, which benefited cancer patients, and a Bi-Annual Gala Show for Street Children of Agora.
“During my high-school years at Xavier University, fashion as a career seemed inevitable. The fad and the colors of the eighties ignited everyone’s interest to be fashionably in,” he recalls. “I personally love Vivienne Westwood. I’m more into the haute couture aesthetic. I love doing more exciting creations. And I’m passionately mastering and polishing my craft.”